This is a repost from Blogblivion, posted here back in November. A few days ago, after an extended break, I made beef stew again, using my big stock pot and about 2 1/3 lbs of $1.59 “London broil” steak cut up small.

I started with a hunk of butter, melted in the bottom of the pot, with the majority of a large, sweet onion chopped and sauteed in it, starting to add seasoning, especially a mess of celery flakes. Then I added the meat and cooked it most of the way through, stirring in more seasoning. Ultimately the main thing was you could really taste the beef and peas, and a bit too much black pepper, but we ate it for four meals. The enthusiastic reception was a combo of it was especially good, the right weather, and completely unexpected. I didn’t have any real garlic, so just used some powder. I was limited in frozen veggies, so it got a lot of peas and some traditional frozen mixed veggies to add variety. It could be enough to have the potato, barley, carrot and onion, but adding at least the peas really adds something.

Okay, the rest of this is the original post:

Yesterday I made what we have dubbed barley beef stew, based on a recipe for beef & vegetable barley soup on the Goya barley package. I had a pound or so of top round steak in the freezer, left from a 2 piece, 2.44 lb package I bought recently for an astonishing $1.89/lb.

Their recipe calls for beef, barley, onion, garlic, spices, boullion, water, and a can of mixed vegetables.

We wanted something thicker, and would be using frozen or fresh vegetables, but I par-cooked the fresh ones based on the idea that precooked would go into the recipe as written. I could probably have just put the fresh veggies in right after adding the water.

Olive oil – tbsp or so
Beef, a pound or so, cut in small, vaguely cube-like pieces
Small onion or equivalent; I used 1/3 of a largish sweet onion
Garlic, 1 clove, minced; was small and I could have used two
Oregano, 2 tsp
Celery salt, probably about 1/4 tsp; not in original, subbed for not having celery or celery seed, either of which I’d have used instead if I’d had them
Beef boullion cubes, 2
Water, 4-5 cups; original was 4, I had to add a good cup more
Bay leaf, 1; I used crushed equivalent of 1+, a little too much
Barley, 1/2 cup dry uncooked
Potatoes, 2 small to medium size, peeled and cubed
Carrots, 2 medium to large, peeled and sliced; I cut the largest slices in half
Lima beans, frozen, maybe a cup
Peas, frozen, maybe a cup
Other spices to taste, in pinches or more, including but not limited to black pepper, red pepper, cumin, savory, parsley, fennel seed.
(Corn, green beans, or mixed might work as well. We had no corn or it would have been in there.)

Heat the oil in a saucepan and brown the beef. For me it was more of a medium pan, too deep to really brown and just cooked and bled water, which I boiled off as much of as I could.

Stir in onion and garlic and cook until onion tenderizes.

Stir in oregano, bay leaf, celery salt or seed, boullion cubes and water. Other spices can go now, later or both.

Bring to boil, then reduce heat and simmer. Original called for an hour, but I cut it short by at least 10 minutes. I put in part of the carrot and potato at start of simmer and the rest maybe half an hour in. I’d probably not par cook them next time and put them in at or near the start.

Add barley and frozen (or canned or precooked) vegetables.

Cook over medium to low heat another 30 minutes.

It was right before or during the last step I added black pepper, about 3 fennel seeds, and a dash of extra oregano.

Anyway, it was the tastiest beef stew or soup I have ever had. I started tasting the beef when it was first fully cooked and it was divine. It reminded me of my late grandfather’s beef stew when it was “on,” maybe a little more flavored. My grandmother is a great cook, but beef stew was one of his specialties. It actually got weaker later on, which, along with thinking it had too much bay leaf flavor, was what inspired me to touch up the flavorings. I also had to add water when I added the barley and frozen veggies. I should note that the barley could have gone in sooner, and actually finished absorbing water and cooking after the heat was off, as it was quite a while before we ate more than a sampling.

Deb said I’d outdone myself, and has claimed the lefover bowl of it for Mars herself. It made four solid bowls worth, and we estimated it at IIRC about 440 calories each, loaded with nutrients and fiber.

Pictures? Why yes, we have them. 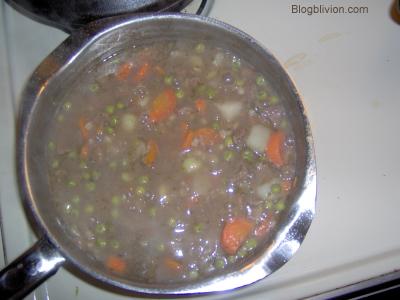 This is after I’d added the veggies, barley and more water. In the first one it looks deceptively watery, but the second one shows just how thick it was in the pan.

The picture below is the leftovers, showing how thick it became after the barley finished. I thought it would be perfect to serve on and with injera (which even if I never try making an Ethiopian dish, I have a reason to try making now). We had wheat bread and butter, which is more traditional. Sadie was being bird-like, but Valerie couldn’t get enough of it. 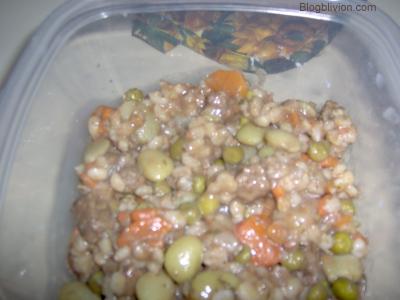