This is a repost of Laurie’s Chicken: Making It Measured from retired blog Accidental Verbosity. I’d have eventually reposted it anyway, but when I went searching for it today I found that Google had changed something about how AV is indexed or ranked that made traffic there plummet a couple weeks ago from just about 300 a day to under 100. Whatever that change was, it made this post not findable at all by title or most of the logical sets of keywords. I should probably start reposting systematically, but this is one of my favorites…

My stepsister used to make a hot red sauce baked on top of chicken breasts, usually as a treat for her less kitchen comfy cousin, and once for me when we were both at my father’s house in Vermont. It was so good, I always remembered it fondly and wanted the recipe.

My stepmother recently asked her about it, and here is the “recipe” as I received it:

1/3 cup ketchup, 1 TBLS W’shire Sauce, black and cayenne pepper to taste, dry mustard, Brown sugar (she said she sometimes used twin B. sugar) and a little apple cider vinegar. Says these are all the ingredients which as you can see its by taste. Cook until slightly reduced. I would think you could dble this as it does [not] make very much.

, based on guesses and adjustments to quantities the first time I made it. Here is what I wrote up as a result, followed by pictures during and after. It is all quite adjustable, but if you like hot and don’t like lack of measurements to guide you, this works:

This would work for 3 breasts, or heavy on 2 breasts. This is extremely hot as measured here, and could be done lighter on both kinds of pepper to soften the impact. Everything is somewhat flexible, beyond that, to taste.

Combine the spices, ketchup, worcestershire, brown sugar, and vinegar. I ended up using water to help flush as much as possible out of the measuring cup I mixed it all in, when transferring to a small saucepan. It gets cooked down either way. I was tasting as I went along, adding brown sugar after it was in the pan. Stir regularly while cooking over low heat.

Preheat oven. I would estimate 400 degrees throughout to be appropriate, though I started at 450. I put butter in an appropriately sized Pyrex pan and let it melt in the bottom before taking the pan back out. This was on the theory I needed something greasing the pan, and everything is better with butter. It would probably work fine with spray or even nothing.

Place the chicken in the baking pan. Cover top of each piece more or less evenly with sauce. Bake until done, perhaps 25 – 30 minutes at 400.

Here’s the sauce on the stove while cooking down: 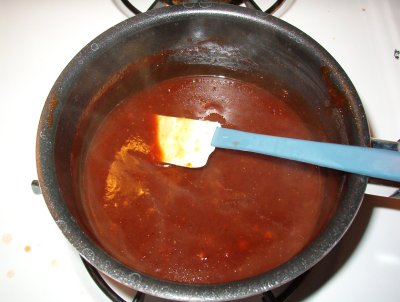 Here’s the chicken after I put the sauce on, before baking: 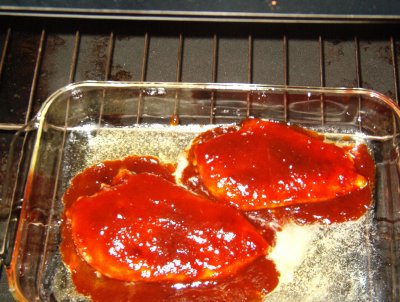 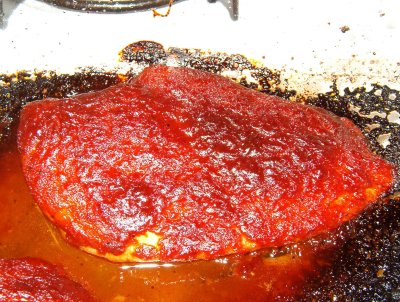 I don’t know how, but Deb makes arguably the best mashed potatoes I have ever had. Normally I’m more of a baked guy. Some might even say I’m half-baked. Anyway, neither here nor there with respect to the recipe above, this is what Deb made to go perfectly with the hot chicken:

It was amazingly good; a bit on the hot side for Deb, perfect to bordering on excessive for me.